Bayerischer Rundfunk (BR) in Munich has deployed two new Avid S6 M40 operating panels to enhance their film sound post-production using the audio software Pro Tools by Avid. As one of the global leading system architects for IT and audiovisual solutions for broadcast and media applications, we supplied and implemented both systems on behalf of BR. Our system integrators configured the two audio consoles according to the requirements of BR. So as not to interrupt the ongoing operation of the broadcaster, the panels were initially set up and tested in a separate room.

Step by Step to the Avid S6 Console

A particular challenge for us was implementing the wishes and requirements of the customer while preserving the modular construction for the Avid S6 console. It was therefore crucial to retain the mechanics of the components and frames in spite of adjustments to the frame set-up. In addition, each module needed to be able to be moved and arranged at will as before.

Before our final construction, Bayerischer Rundfunk fine-tuned the Avid S6 consoles to suit their requirements. In the first test phase, the BR sound engineers repositioned the separate elements in the frame set-up to find the ideal position. From there, a customised construction of the systems could be developed: The automation module with a jog wheel is located to the right of the master module with a touch monitor unit. The mouse lies directly beneath it, and the keyboard was slightly offset to better support the arms. The operating interface was complemented by four fader and process modules as well as four knob and display modules. After the second test phase, in which the console was connected and BR had configured the operating interface to suit their requirements, we set up the console one final time. 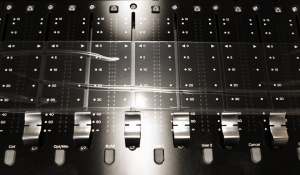 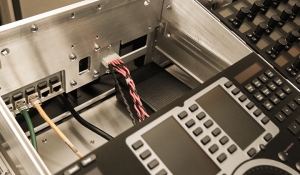 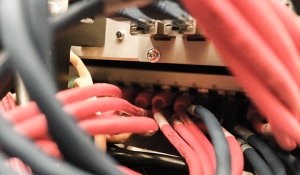 While constructing the S6, we raised the side walls of the chassis at the rear by 10°. With our self-developed construction, the rear two rows with the knob and process modules were raised. This improves the ergonomics and visibility of the displays and operating elements.

In order to stabilise the raised walls, we attached additional brackets to the frame. During our adjustment period, we were able to continue using the original mechanics for bolting the t-strips. For the S6 console at BR, we deployed four knob modules per console. Bayerischer Rundfunk now has five knobs per channel. The dual functions of the knobs permit control by either “pressing” or “rotating”.

First of all, we installed the fader modules, each with eight faders. We then inserted the core of the console: the master touch module. To conclude, knob modules, process modules and automation modules with jog wheels were incorporated into the console construction. After the second successful test phase, we were also able to connect the individual modules with the master touch module.

The M40 version of the S6 audio console deployed in the premises of Bayerischer Rundfunk features numerous configuration options. Below, we fitted a five-knob-per-channel configuration, each with four process fader modules, process modules, knob modules and display modules. In the middle is the automation module with a jog and the master module with a touch monitor device.

We then performed an initial test run for the latter. In order for BR to operate their audio post-production smoothly later on, we then checked the module – everything worked perfectly fine. Altogether, we installed four fader modules. Of course, in the fader test, we checked the controllers for their functionality as well.

All tests were successful. During sound post-production, Bayerischer Rundfunk is now easily able to manage the Avid Pro | Tools via the operating interface. The individual settings – such as the fader groups – were saved in the respective projects. The option of writing automation on several tracks simultaneously also simplifies the workflow. In order to meet the broadcaster’s varying configuration requirements, the S6 consoles can also be configured later on.

At the end of the process, the two Avid S6 M40 user interfaces have now found their way into the BR recording studios B and C.

Qvest Media implements post production workflows in the cloud for “The Taste”...
Scroll to top